How Would You Feel If Trump Wins The Election?

The 'People' Seek a Voice in Police Reform

Summer is coming to an end for the teens at Art@Work Upton – or, at least, to the projects they have undertaken in a five-week apprenticeship in which they have created murals and mosaics in the Pennsylvania Avenue area. Working out of Jublilee Arts, the cultural center at 1947 Pennsylvania Avenue, about 80 high school students are being paid through the city’s YouthWorks program. They have been teamed with eight artists to create public art, transforming an area that holds y 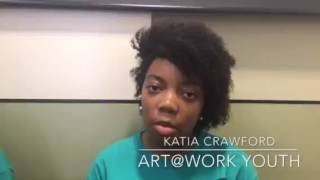 The Baltimore City State’s Attorney caught the courtroom by surprise Wednesday when, instead of starting a trial against Officer Garrett Miller for his role in the arrest and death of Freddie Gray, her chief deputy announced that all charges were being dropped against Miller as well as two others who were awaiting trial, “in the best interest of justice.” That brings and end to charges that, when announced by Mosby on May 1, 2015, after days of unrest, triggered celebrations

PHOTOS (Credit: Donald Logan) Benny Carter Jr. and a friend working out at the Upton Boxing Center on Pennsylvania Avenue. “When I hit them bags, I hit all the people that ever said no to me.” Benny Carter is 15 years old and has spent most of his life around Mosher Street, in the heart of Sandtown-Winchester-Upton. A fourth generation Baltimorean and a ninth grader at Digital Harbor High School, he was on suspension most of the school year and spends much of his time on the

Baltimore Women Show Up To Polls For Historic Election

How Would You Feel If Trump Wins The Election?

Women Place Their “I Voted” Stickers On Susan B. Anthony’s Grave Stone